The End of "Battlestar Galactica"... 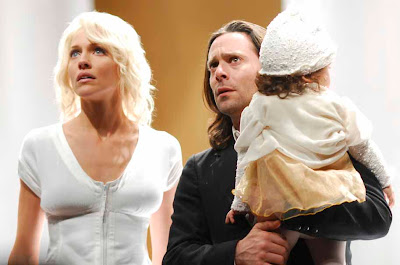 Executive producers Ronald D. Moore and David Eick have announced that the current 22-episode, Season 4 of Vancouver-shot "Battlestar Galactica" will be its last.

"This show was always meant to have a beginning, a middle and finally, an end," said Eick and Moore.

"Over the course of the last year, the story and the characters have been moving strongly toward that end and we've decided to listen to those internal voices and conclude the show on our own terms".

"On a personal level, it's been a creative privilege and an honor for all of us who work on the show and we know we'll be lucky to ever see its like again. And while we know our fans will be saddened to know the end is coming, they should brace themselves for a wild ride getting there ­ we're going out with a bang."

"We respect the producers' decision to end the series and are proud to have been the home of this groundbreaking show, " said the Sci Fi Channel's Mark Stern .
"We have always known that Ron and David had a plan for Galactica and trust that fans can look forward to a truly amazing final season."
An extended two-hour episode, "Razor," will premiere in November.
at 3:09 PM