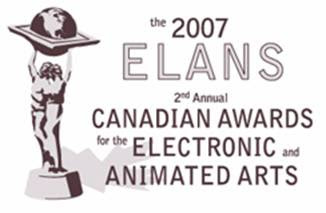 "As the movie industry goes to Hollywood for its Oscars, so will the world of video gaming and animation come to Canada for their 'Elans'," said Holly Carinci, Founder, Producer of the Canadian Awards for the Electronic and Animated Arts (CAEAA), as she announced the 2nd Annual Awards Show for the Video Gaming/Animation industries will take place February 15th, 2008, at The Centre in Vancouver for the Performing Arts.

All submissions for the 2nd Annual Elan Awards are due Friday, December 21st. This extension will allow the participation of upcoming games including "Halo 3", "Crysis", "Guitar Hero III", "Need for Speed ProStreet", "Super Mario Galaxy" and "BioShock" to qualify.

Official Hotelier of the Elans is the Sutton Place Hotel, Vancouver.

HollywoodNorthReport, SneakPeek.Ca and BigGameHunter are delighted to continue our second year of coverage of this event...