Warners Interactive Hooks Up With "Watchmen"... The game captures the action and intrigue of the “Watchmen” feature film, directed by Zack Snyder, who previously helmed the blockbuster “300.” The screenplay for “Watchmen” is by David Hayter and Alex Tse, based on the award-winning graphic novel illustrated by Dave Gibbons and published by DC Comics.

The film is produced by Lawrence Gordon (“Die Hard”), Lloyd Levin (“United 93”) and Deborah Snyder (“300”), with Herbert W. Gains (“The Brave One”) and Thomas Tull (“The Dark Knight”) serving as executive producers.

“Watchmen” is a presentation of Warner Bros. Pictures and Paramount Pictures in association with Legendary Pictures.

"...A complex, multi-layered mystery adventure, “Watchmen” will take us to the brink of destruction. In alternate 1985 America – in which costumed superheroes are not only real but have ultimately been outlawed – one former hero goes looking for the truth behind the murder of one of his own, but uncovers a devastating conspiracy to drag the world implacably closer to its own end..." “The filmmakers have been extremely helpful in developing the high-quality game story and we are working to match the outstanding visual style of the film.”

The videogame based on WATCHMEN will go beyond the film and delve into the characters, rivalries and challenges in a mature action-brawler. The game provides gamers with visceral superhero combat as urban vigilantes Rorschach and Nite Owl... "Supergirl: Blind Spots" on The CW

"Blind Spots" is the next episode of "Supergirl", based on the DC Comics character, directed by David Ramsay, starring ... 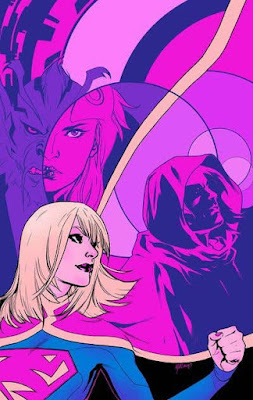