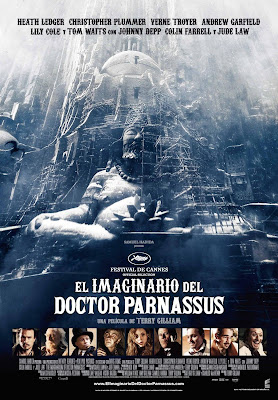 "The Imaginarium of Doctor Parnassus" is the Vancouver-lensed fantasy, directed by Terry Gilliam, from a screenplay by Gilliam and Charles McKeown.

The feverish, surreal film follows an ancient leader of a travelling theatre troupe (Christopher Plummer) who makes a deal with the Devil (Tom Waits), taking audience members through a magical mirror 'to explore their imaginations'.

The late Heath Ledger as the angelic 'Tony', was replaced in the film by smarmy Johnny Depp, wide-eyed Jude Law and nasty Colin Farrell.

"...In the present day, immortal 1,000-year-old Doctor Parnassus (Christopher Plummer) leads a traveling theatre troupe—including a sleight of hand expert, Anton (Andrew Garfield), and a dwarf, Percy (Verne Troyer)—that offers audience members a chance to go beyond reality through a magical mirror in his possession.

Parnassus had been able to guide the imagination of others through a deal with the Devil (Tom Waits), who now comes to collect on the arrangement, targeting the doctor's daughter (Lily Cole). The troupe, which is joined by a mysterious outsider named Tony (portrayed by Heath Ledger, Johnny Depp, Jude Law, and Colin Farrell,)embark through parallel worlds to rescue the girl..."

Sneak Peek the official HD trailer for "The Imaginarium Of Doctor Parnassus"...