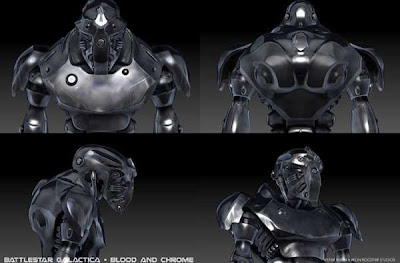 "Blood & Chrome" is set between the TV series "Caprica" and "Battlestar Galactica", depicted in the 2007 webisode series, "Razor Flashbacks": 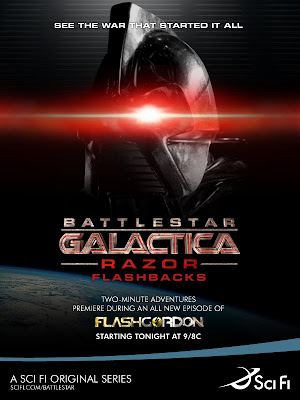 "...'Blood & Chrome" is set in the 10th year of the first 'Cylon' war. As the battle between humans and their creation, a sentient robotic race, rages across the 12 colonial worlds, a brash rookie viper pilot enters the fray. 'Ensign William Adama', barely in his 20s and a recent 'Academy' graduate, finds himself assigned to the newest battlestar in the 'Colonial' fleet… the 'Galactica'.

"The talented but hot-headed risk-taker soon finds himself leading a dangerous top secret mission that, if successful, will turn the tide of the decade long war in favor of the desperate fleet..."

Click the images to enlarge and Sneak Peek "BSG: Razor Flashbacks"...
at 8:08 AM