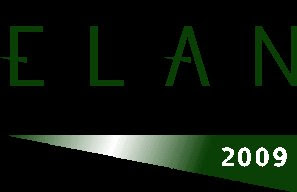 Submissions are officially now open for entry into the 3rd Annual ELANs, the awards show that’s become something of a phenomenon over the past two years with Hosts such as William "Star Trek" Shatner and Seth "Family Guy" MacFarlane celebrating video games, animation and, new this year, visual effects.

Now, anyone in the world from these three industry sectors can submit their work for an ELAN.

"The ELANS give all visual effects, animation and video game professionals the opportunity to showcase the best they have to offer and be complemented with what will arguably be the most coveted award in Digital Media", said Doug Campbell, President of Spin West VFX.

"The ELANs represent a unique opportunity for the industry to honour and acknowledge the talents and artistry of the people who make games," added Kelly Zmak, President of Radical Entertainment.

"We do this as our chosen profession: The ELANs provide a perfect setting to celebrate this powerful form of entertainment and art.”

The ELANs will give out 39 statues at the Centre in Vancouver for the Performing Arts, Saturday February 28, 2009.

All three sectors have twelve of their own categories, including one Honorary Award, one publicly chosen award and students have one for each of the three industries.

February 2, 2009 the ELANs will announce 144 nominees for their upcoming awards show.

The ELANs will also soon be putting out a call for Jurors/Judges to industry/media professionals from around the world.

In the meantime, get your submissions in by going to http://www.theelans.com and downloading the submission forms.

"If you win, you can honestly say your work or production is the best in the world", said Carinci.

1. VIDEO GAME OF THE YEAR

4. BEST DIRECTOR for an ANIMATED PRODUCTION

5. BEST VOICE OVER in an ANIMATED PRODUCTION (All genres)

6. BEST SOUND in an ANIMATED PRODUCTION

10. BEST WRITING IN AN ANIMATED PRODUCTION

2. BEST VISUAL EFFECTS in a BROADCAST SERIES, MINISERIES or MOW