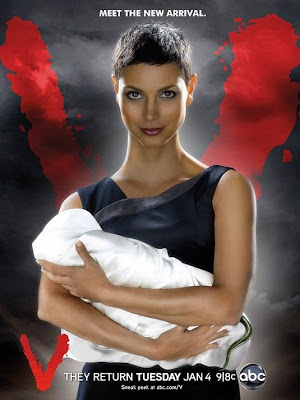 Sneak Peek the new poster supporting the return of "V", January 4, 2011.
The Vancouver-lensed TV series, debuting on ABC, November 3, 2009 is a 're-imagining' of the 1983 miniseries created by Kenneth Johnson, chronicling the arrival on Earth of a technologically advanced reptilian alien species which ostensibly comes in peace, but actually has sinister motives. 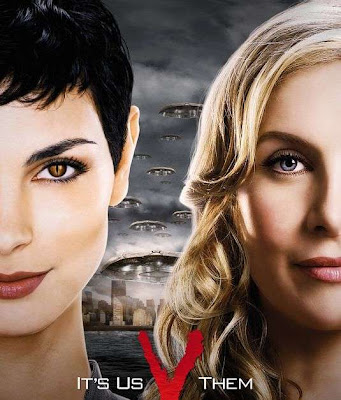 May 13, 2010, ABC renewed "V" for a second season.
"...Giant spaceships appear over 29 major cities throughout the world and 'Anna' (Baccarin), the charismatic leader of the extraterrestrial 'Visitors', declares that they come in peace. The Visitors claim to only need a small amount of Earth's resources, in exchange for which they will share their advanced technological and medical knowledge. 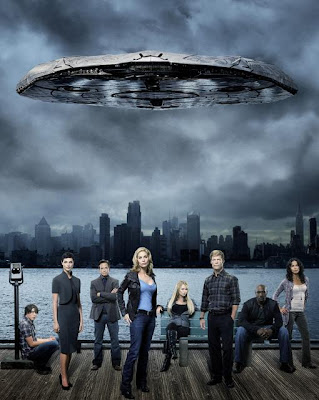 "As a small number of humans begin to doubt the sincerity of the seemingly benevolent Visitors, FBI counter-terrorism agent 'Erica Evans' (Mitchell) discovers that the aliens have spent decades infiltrating human governments, businesses, and religious institutions and are now in the final stages of their plan to take over the Earth. Erica joins the resistance movement, which includes 'Ryan' (Chestnut), a Visitor sleeper agent who over time developed human emotions and now wants to save humanity. 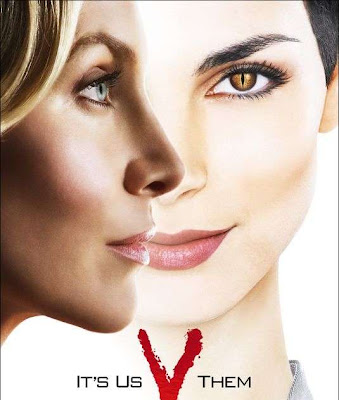 "Their rebellion is further challenged as the Visitors have won favor among the people of Earth by curing a variety of diseases, and have recruited Earth's youth — including Erica's son 'Tyler' (Huffman) — to serve them unknowingly as spies..."
Click the images to enlarge and Sneak Peek "V"...
at 9:17 AM