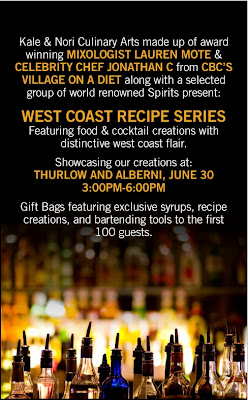 "...Admission is free! In fact, the first 100 people through the cocktail party will receive a goodie bag filled with bar tools and a special bottle ingredient to help stimulate your home cocktail ideas..."
CBC's "Village On A Diet", featuring Chef Jonathan C, is the 10-episode documentary series, set in the town of Taylor, British Columbia, where over 60 percent of its population was either overweight or obese. Because of this, the entire town pledged to lose one collective ton in three months, as well as have their "...struggles and successes..." documented on camera.
For more info on Kale & Nori : www.kaleandnori.com
Click the images to enlarge...
at 6:40 PM