Vancouver's Pantages Theatre, built in 1907 as a vaudeville house will be restored thanks to the efforts of the Pantages Theatre Arts Society, with bold plans for a $26-million renovation that will turn it into a home for the City Opera of Vancouver, the Vancouver Cantonese Opera and Vancouver Moving Theatre.
The plan is to restore the glory of the Pantages, the second of 72 theatres built by Alexander Pantages in North America, while updating it for a new generation.

Under the proposal, there will be a 650-seat main house, a 99-seat black-box theatre/rehearsal space, an art gallery and a lobby with elevators. The plan also calls for modern wiring/lighting, movie screen and back-of-seat titling in English, French and Chinese, with the capacity for five more languages. 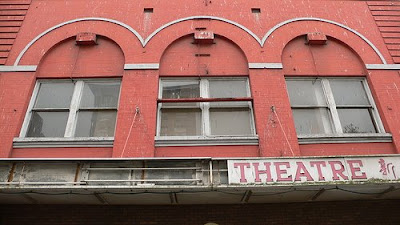 Owner of the building, developer Marc Williams, is backing the project, which he describes as a way of restoring a neighbourhood in Vancouver's 'troubled' downtown east side.

'Troubled', according to one local observer, because of "...the availability of cheap, toilet-bowl street-drugs, while developers wait for transient binners, pan-handlers, mentally ill, low income seniors, homeless and the disabled to overun the area, forcing desperate property owners to sell below market value. Transients are then pushed further east, while city blocks along East Hastings are torn down to make way for $1-$3 million condos..."

Williams plan however includes creating 136 housing units, built on adjacent land he also owns. He wants to turn those over to a non-profit housing group.

"I'd like to emphasize that no one, not one single person, will be displaced by this project," Williams said.

"No one lives here now and we want to contribute housing and a theatre to this neighbourhood and the city...."
at 11:10 AM